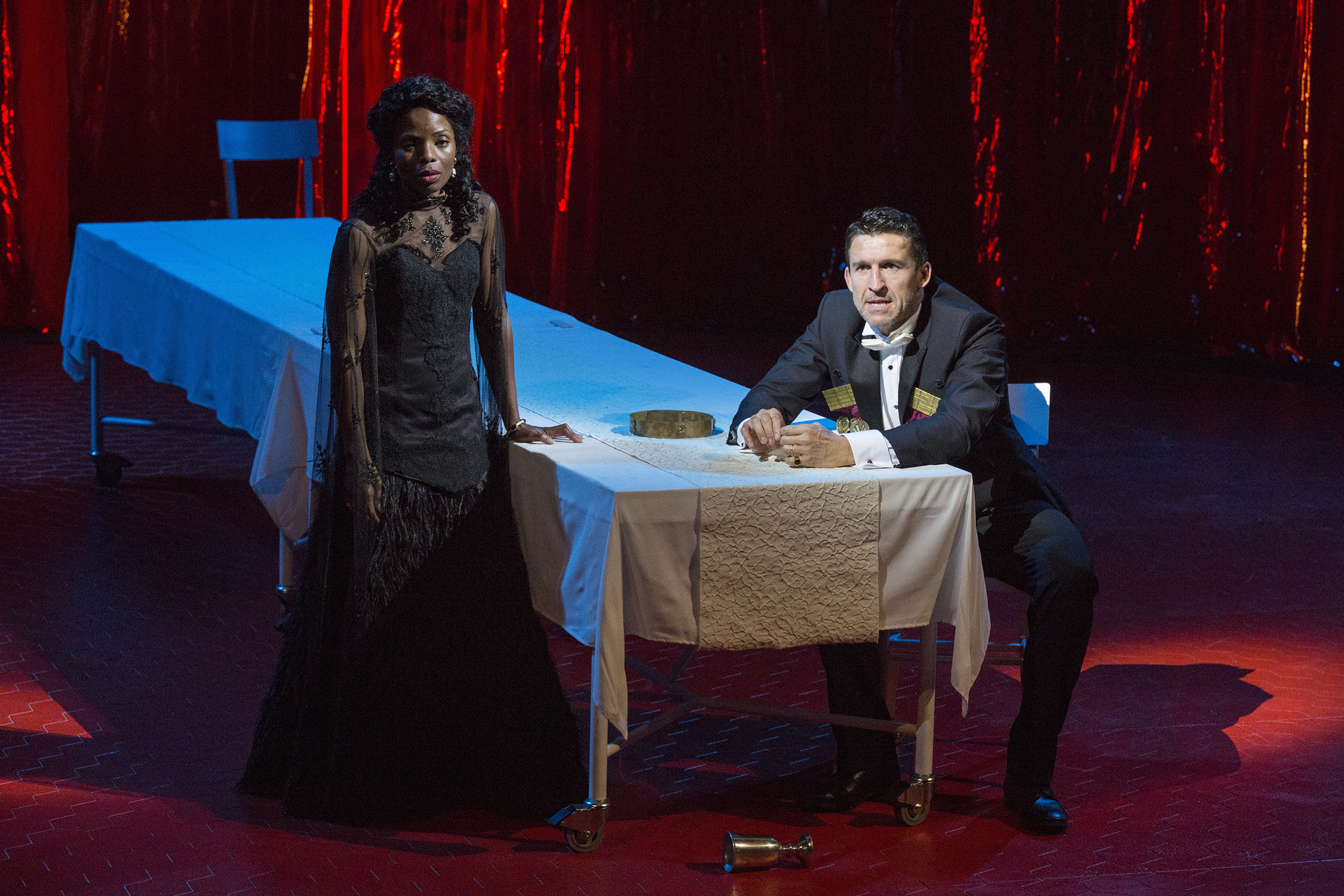 How did Lady Macbeth manipulate Macbeth?

Pope Francis leads the world in the recitation of The Angelus, live from Rome. Ambrose discusses his amazing missionary experiences in this Missionaries of the Poor Retreat. Visiting clergy concelebrate this sacrament. Discussing the story of the rich man and the dishonest overseer, Father Leo Clifford develops the theme that we need to treat others as we ourselves wish to be treated. If we request mercy and forgiveness, we should give the same to others.

Maria Mercedes Robles discusses the faith and raising a special needs child with Guillermo Hernandez. Mitch Pacwa joined Fr. Groeschel in Krakow for a Mass which Fr. Mitch preached the sermon for the pilgrimage group. The group also visited the Royal Salt Mines to see the various shrines carved out of salt in living testimony to God and His creation.

Crossing over the Danube, Fr. A documentary on the incredible contributions of John XXIII to the Church and to the world, featuring historic footage from the Vatican Archives and interviews with many on his legacy including his grand nephew, Marco Roncalli. Father John teaches his friends: Renata the girl; Timothy the mouse, and Leopold the frog about the parables of Jesus through song, puppetry, animation, and much more.

From the Annunciation of the Angel Gabriel to the finding of Jesus in the Temple, this delightfully animated program leads children through the Joyful Mysteries of the Rosary. Doug Barry explains why knowing the enemy is a top priority in spiritual battle. We should never feel discouraged for being imperfect. Mother reminds us that Jesus came for the sinner not the virtuous — he came for you specifically because you are imperfect.

Jim Amsing of the Calgary Police discusses integrating your Faith and your work. Along the way, you will hear some exciting stories from his career as a police officer, and later as a spiritual advisor to police officers. Thomas Steinke, IVE, explore great Marian saints throughout history; a Marian devotee discusses his battle with leukemia. Edward Sri turns his attention to two key ingredients a relationship must have if mature love is to flourish. Mother tells the audience about the gift of Understanding, which allows us through faith to grasp what we do not comprehend. Mother gives detailed instructions on learning to stand tall and do what the Lord asks, regardless of the cost.

She is preparing people for a time of great tribulation that she feels is very near. The Five Joyful Mysteries are presented using a backdrop of stained glass windows to illustrate each mystery. Issues of superstition and idolatry are on the agenda today as our hosts tackle the burning question: Can religious practices be excessive? Learn how to prioritize quality over quantity in your life. A film on the origins of the Servants of Mary, a religious order dedicated to the care of the sick and poor around the world. Today, they persevere in the face of revolutions, epidemics and religious persecutions. Father Leo Clifford reflects on the virtue of humility—showing how it can set you free. Young Catholics describe how faith guides their decisions in a secular society.

The value of an authentic Catholic education. Plus, when should your children learn what you did when you were young? Dynamic husband and wife radio team Jim and Joy Pinto bring their powerful witness to daytime TV with special guests and topics focusing on marriage, family, and pro-life issues. Owen Gorman and Fr. John Hogan relate the storied history of the Shrine of Our Lady of Walsingham in England, including its resurgence in recent years after having been destroyed in the Reformation. Former NFL wide receiver Danny Abramowicz and team present a hard-hitting look at Catholic spirituality for men; focusing on the call to be a warrior. A look at the Benedictine monks at Pluscarden Abbey. Abandoned after the Reformation but revived in the 's, it is the oldest monastery of men in use in the United Kingdom.

A Rosary's meditation for Children. In studio with children conversation, meditation, singing and praying. The Sorrowful mysteries of the Rosary present events from Jesus' passion in a way that children can understand and be inspired by. Mitch Pacwa leads the Sorrowful Mysteries of the Rosary from the actual holy sites and shrines where they took place, bringing the Gospels to life and offering a deeper understanding of the Rosary meditations. By virtue of our baptism, we're called to be disciples, but not as followers. Christ wants us to lead with Him through a missionary discipleship. Father John Bartunek joins Johnette to show viewers the way.

Father Andrew Apostoli, C. Joseph Lojacono, IVE, journey through the papacy and total consecration; a Marian devotee, an IVE sister, shares her calling to her religious vocation. Audience members get to ask the brilliant 20th Century thinker, G. Chesterton questions via satellite from London; G. Chesterton played by actor Chuck Chalberg. After breaking with the Catholic Church, the Protestant movement soon begins to fracture over disagreements on basic theology and the Bible itself, leading to armed conflict and persecution. Father Leo Clifford reflects on Christ as the center of the moral life.

Abortion is not just a religious issue. In fact, many who support the effort to protect children in the womb are atheists. See how the faith community can work productively with them. Scott Hahn and Mike Aquilina trace the roots of Catholic Liturgy back to the most ancient times recorded in the Bible. An interview with Brian Curtis, who has six children and is a lawyer from Canberra, Australia. He tells about why he fell away from Catholicism and how he eventually made his way back to the Church. Doug Barry looks at the responsibilities Catholic husbands and wives have to each other and their families in the midst of spiritual battle. Bear and the rest of the bikers head down to Texas' Big Bend Country, encountering a bicyclist on a similar journey and an inspiring family along the way.

A further look into the Benedictine Rule and what it is like to be a monk at Pluscarden. An amazing story of the Jesuit missionary St. Francis Xavier as he tries to win souls for Christ in Japan. Groups from the world pray the rosary in several languages as part of this candlelight vigil from the Shrine of Our Lady of Fatima. The adventure unfolds as the police, the bishop, and the townspeople gradually come to believe the children's remarkable story. Mitch Pacwa leads the Glorious Mysteries of the Rosary from the actual holy sites and shrines where they took place, bringing the Gospels to life and offering a deeper understanding of the Rosary meditations.

Thomas Dubay introduces his series, which will examine aspects of Faith such as to doubt, certitude, opinion and suspicion, and look at how we know that God exists. Father John Bartunek discusses the practical elements involved with proclaiming the Good News of Jesus Christ, an important responsibility in fulfilling our missionary discipleship by virtue of our baptism. Jonathan Dumlao, IVE, emphasize the vital role of the sacraments; a Marian devotee shares how her faith helped her persist through all of her struggles.

A woman who recently returned to the Church explains key things to keep in mind, and offers effective strategies for those concerned about a family member who no longer practices their faith. Father Leo Clifford develops the Parable of the Good Samaritan as the motivation for a philosophy of life for a Christian. Seen from the perspective of how we use God's gifts, we are called to help others on our path - not ignore them. Teresa Benedicta of the Cross to proclaim that all need to make sacrifices and pray for sinners. Part 2 of 2. A Eucharistic and Marian Holy Hour in which children will be united throughout the world praying for families and for peace. Debra Kelsey-Davis and Kelly Johnson offer caregivers practical guidance and spiritual nourishment to help them physically and emotionally carry out their obligations.

The history of Catholic missionaries within the Southern Chin Hills, where their mission of faith continues to bloom bright, despite being a religious minority. Clifford meets up with Fr. Charles Connor for more insight on St. Ignatius Church and how it relates to the Catholic heritage of Southern Maryland. Hosted by Johnnette Benkovic Williams, Women of Grace encourages and affirms women in their dignity as daughters of God and in their gift of authentic femininity. Intrusion on Netflix. Knocking in theaters Mass in theaters Survive the Game in theaters and on demand. Found on Netflix Night Teeth on Netflix. The Harder They Fall on Netflix.

Passing on Netflix. Wolf in theaters Flee in theaters Try Harder! Parallel Mothers in theaters. American Underdog in theaters Starbright in theaters. Jockey in theaters. Since this article was published, the following movies have been delayed:. Already a subscriber? Log in or link your magazine subscription. My power is Black. Darkness will pour forth from the doors of hell Because intuitively, you will try to make light to fight it, right? But you need to learn that even at the brightest light, shadows are always there. And more than that. In bright light, shadows are even more well-defined and easy to manipulate.

Afraid of the dark!? Darkness allows us to understand others, to see what they value when they believe no one else is looking. It allows us to be honest with ourselves, to express those values that we would disavow in the light. The light blinds us. Rui Hachiouji Code: Breaker can manipulate her shadow. Saechika Hachiouji Code: Breaker can manipulate his shadow. Mirajane Strauss Fairy Tail is a powerful user of this ability. Pride Fullmetal Alchemist manipulating his shadows.